Over the past week, the California Energy Commission hosted several in-person and virtual community workshops on the state Lithium Valley Commission’s draft report on lithium extraction in the Salton Sea region — an important part of the public input process that community members and Alianza advocated for.

Lithium has the potential to transform the communities of the Salton Sea region with new jobs, infrastructure, and investment. But the potential drawbacks, including what it all means for water resources and the local environment, remain top questions on the minds of people living in those communities. 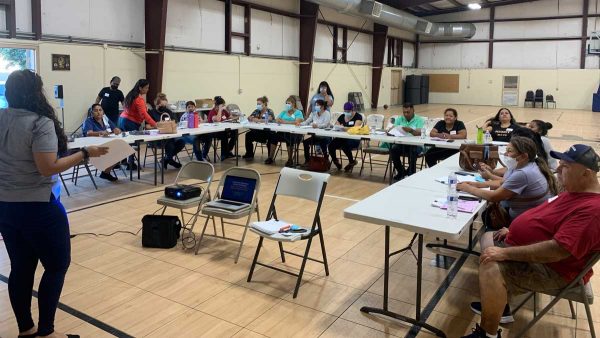 The series of workshops were an opportunity for community members to provide verbal comments on the report, since many people in the Salton Sea area may have had trouble submitting comments online.

To help people prepare for the workshops, Alianza and partners hosted an informational meeting in Thermal. More than 20 people from Salton Sea communities attended.

Community members agreed with many of the recommendations in the draft report, such as those around participatory budgeting and ensuring jobs go to local residents.

But many also raised concerns about the report’s lack of information on the potential environmental impacts of lithium extraction and the needed mitigation efforts.

“When we try to ask questions about environmental impacts, we just get told the same thing: We don’t have the answers right now,” Sara Renteria of North Shore said during one of the workshops. “We need answers now.”

The recommendations from residents included designating a person or body with informing communities about the findings of planned research into the environmental impacts. At Alianza’s community meeting, some people also wanted to make sure that the “Lithium Valley” was defined to include the Eastern Coachella Valley.

The public comment period on the draft report closes Friday. A final report is due to the Legislature on Dec. 1.