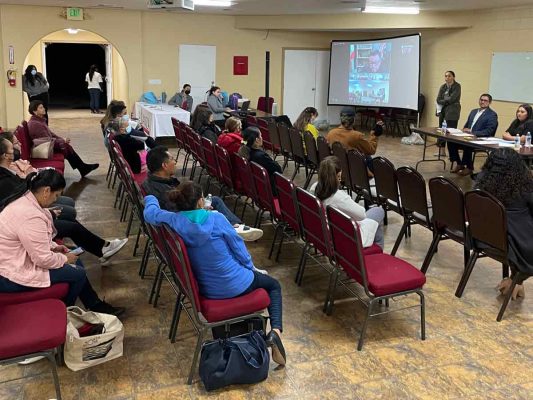 The panel was held at the Torres Martinez Reservation Tribal Hall in Thermal.

There’s no doubt that fully understanding the complex crisis at the Salton Sea takes commitment, time, and a fair amount of scientific knowledge. But the desire to understand is strong among people living close to the sea.

We constantly hear from the residents of Salton Sea communities about how they wish they were getting more information about the environmental problems at the sea and what their government is doing to address them.

The event took place in person at the Torres Martinez Reservation Tribal Hall in Thermal and streamed virtually via Zoom and Facebook.

Alianza organized the panel at the request of residents, who wanted an opportunity to take their questions directly to government officials who have the power to allocate resources and attention to the Salton Sea. Community members heard about different projects planned or already happening at the Salton Sea, such as the North Lake Pilot Demonstration Project near North Shore, and the funding that is paying for those projects.

“For us, it is of great importance that these kinds of forums, whether it’s sponsored by the state, community organizations, or other levels of government, keep happening to ensure that information is being provided in real-time,” Garcia said.

He continued: “Today you heard of different projects on the ground or on the way. Today you were able to hear about the purpose of these projects. I will repeat, if there is any doubt, these projects are to mitigate and minimize environmental impacts on air quality. This is the focus of the 10-year plan.”

Community members shared ongoing concerns about public health at the Salton Sea and the importance of community input in projects.

“I would like for you to work with my community,” Thermal resident Mariano Romano said. “We need a long-term plan. We shouldn’t wait for people’s health to get worse.”

Alianza Coachella Valley wants to thank elected officials for being part of the panel and all community members who attended. For anyone interested in listening to the panel, which was conducted mostly in Spanish, a recording is available on Alianza’s Facebook page.