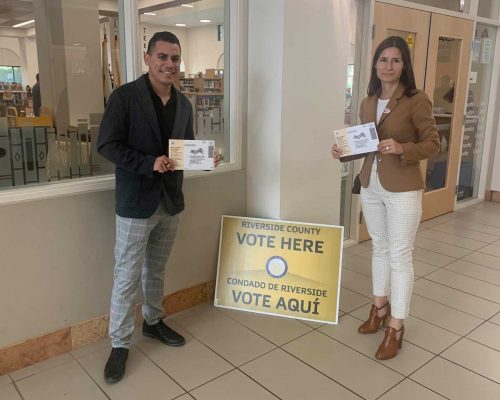 In the weeks leading up to the Nov. 8 election, Alianza was once again able to deploy a team of canvassers to encourage participation among East Coachella Valley voters. The power of the vote is one of the best ways for residents to influence policy and shape a government that matches their values. That’s why Alianza always works without political party or candidate affiliations to create informed voters.

This outreach to Latino communities is critical. As a recent report from the UCR Center for Social Innovation and Inland Empire Community Foundation Cielo Fund found, voter registration and turnout among Latinos in the Inland Empire lag behind that of non-Hispanic whites.

Similar to our work before the June primary, for this election Alianza had eight paid canvassers working more than three weeks in the Eastern Coachella Valley. In total, they visited 1,036 homes. They also sent 792 text messages encouraging residents to vote. We want to thank the canvassing team for their hard work going door to door in neighborhoods throughout the area.