Executive Director Silvia Paz had the opportunity this week to speak directly with President Biden about the potential lithium extraction holds for building up communities around the Salton Sea.

Silvia, who also chairs California’s Lithium Valley Commission, spoke with the president alongside industry representatives, labor leaders, and administration officials during a Zoom meeting organized by the White House to discuss the role natural resources such as lithium have in expanding greener technologies and growing the economies of disadvantaged communities. 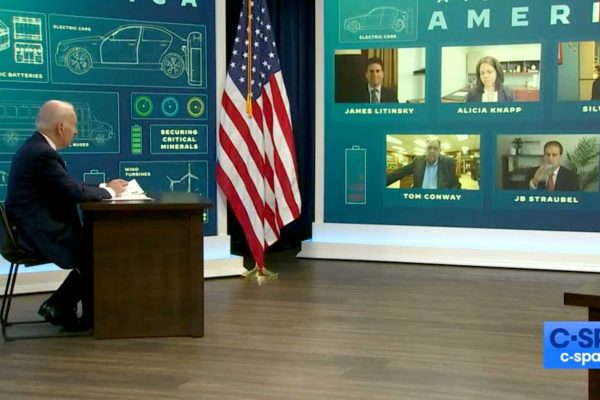 The White House event on mineral resources and clean energy.

An important concern for people living near the Salton Sea is any environmental impacts from lithium mining. Biden said regulations and oversight will be important to avoiding any harm.

“We have to ensure that these resources actually benefit folks in the communities where they live, not just the shareholders,” Biden said.

Biden spoke of efforts to extract lithium from around the Salton Sea as a key move to make the U.S. less dependent on foreign sources of the metal, which is important in the manufacturing of electric vehicle batteries and other tech products.

Silvia used her time to tell the president how communities near the sea have long struggled because of a lack of infrastructure, and that those challenges have become more apparent during the COVID-19 pandemic.

“When we — our community — hears about the excitement around lithium, there is a cautious optimism because it falls around this context: a community that has seen unfulfilled promises,” she said.

When asked by Biden about her hopes and worries around lithium, Silvia said her worry is around environmental degradation and her hope is for real transformation in the region. Local hiring will be an important part of that transformation.

Alianza is currently working with the Center for Social Innovation at the University of California, Riverside to explore how to diversify the economy around the Salton Sea in ways that will benefit the people living closest to the sea. The effort, know as Our Salton Sea, launched in 2021.

Read coverage of Tuesday’s White House event in the Los Angeles Times and The Desert Sun. Or watch the full event: